Latest Express Entry Draw Occurs 8 Days After the Last Draw: Another 3600 Candidates Invited, even as the score Drops to its Minimum

The latest Express Entry Draw results were released yesterday, 20th of August, just eight days after the last invitation. A total of 3,600 candidates got an ITA with a minimum CRS score of 457. It is the lowest score recorded since May 2019.

The Federal Express Entry system is the immigration initiative through which Canada selects prolific foreign workers to reside permanently in the country. Some of the requirements to be considered include their education, age, language competency level, skilled work experience, and other related criteria.

From the listed guidelines above, qualified and high scoring candidates receive an Invitation to Apply (ITA). The recent draw yesterday is coming as a surprise; the last time such occurred was in 2015. However, 8 days after a previous draw, IRCC releases a tie-breaking CRS benchmark of 457.

In our previous report regarding the August 12th draw, we noted that whenever there is a close-range between two successive draws, then, the recent CRS decisive score will likely be lesser than the previous one.

To secure PR in Canada, the Express Entry is one of the most accessible routes. There are three subcategories under the program; Federal Skilled Worker (FSW), Federal Skilled Trades (FST), and Canadian Experience Class (CEC).

Consult a Canada Immigration Consultant in Abu Dhabi to find out if you are qualified for the program.

IRCC and Its Recent Trend of CRS score: Critical Points to Note

IRCC implemented the decision-making benchmark for the recent draw on candidates who have registered a profile on the portal before the 24th of March 2019 (15:32:42 UTC).  Therefore, any applicant whose profile score according to the CRS is above or equal to 457 before the stated date above must have received an invitation.

So, the recent number has aggrandized the total ITA issued since 2015 to 56,200 according to the chart below. 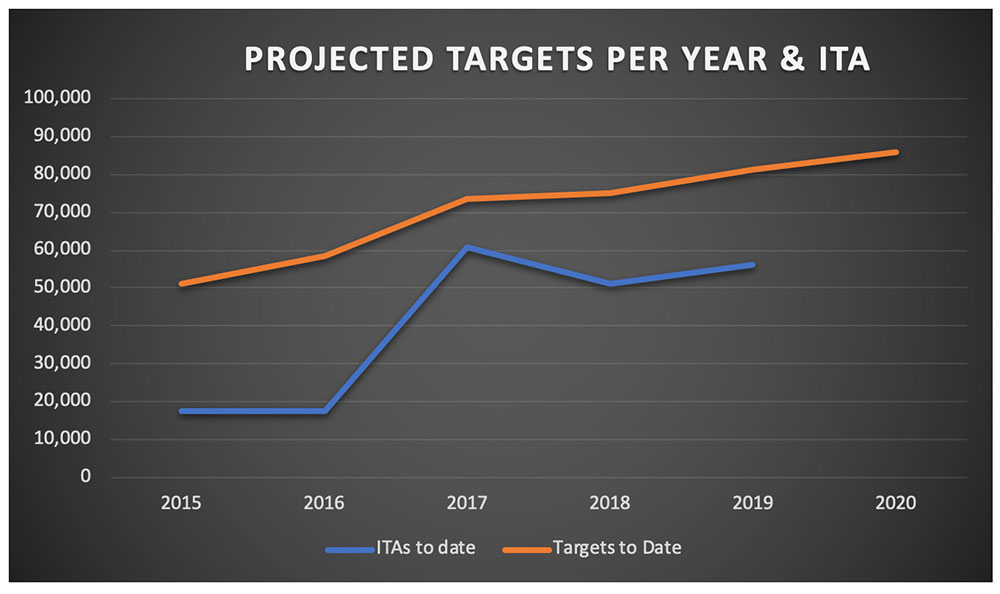 It is also imperative to observe that the past four draws have remained at 3,600. It is in contrast and even an increase to the 3,350 ITA issued on every draw between Jan to 10th of July.

So, we can draw a conclusion that if the IRCC continues to issue a minimum of 3,600 per draw for the remaining months of the year, then, it will exceed the estimated number for 2019. However, we cannot but wait to see how events will unfold in subsequent months.

It is not surprising to see candidates diversifying their approach via various provincial nomination program. Most of these candidates hire high-priority visa consultants in Abu Dhabi to monitor their profile. As we released in earlier reports, Saskatchewan through its SINP pool issued nominations to 150 candidates.

Also, Ontario, on the 19th of August, invited 997 candidates from the Federal pool to apply for nomination. This, it achieved, through the territory’s Human Capital Priority stream, which covers only ten selected occupations.

The same applies to British Columbia and Prince Edward Island. All of these provinces have conducted one draw or the other within the last 8 days.

All thanks to Provincial Nomination Program (PNP) which has provided a light at the end of the tunnel for candidates who have lower scores in the Federal Express Entry pool, but have the right occupation for PNPs.